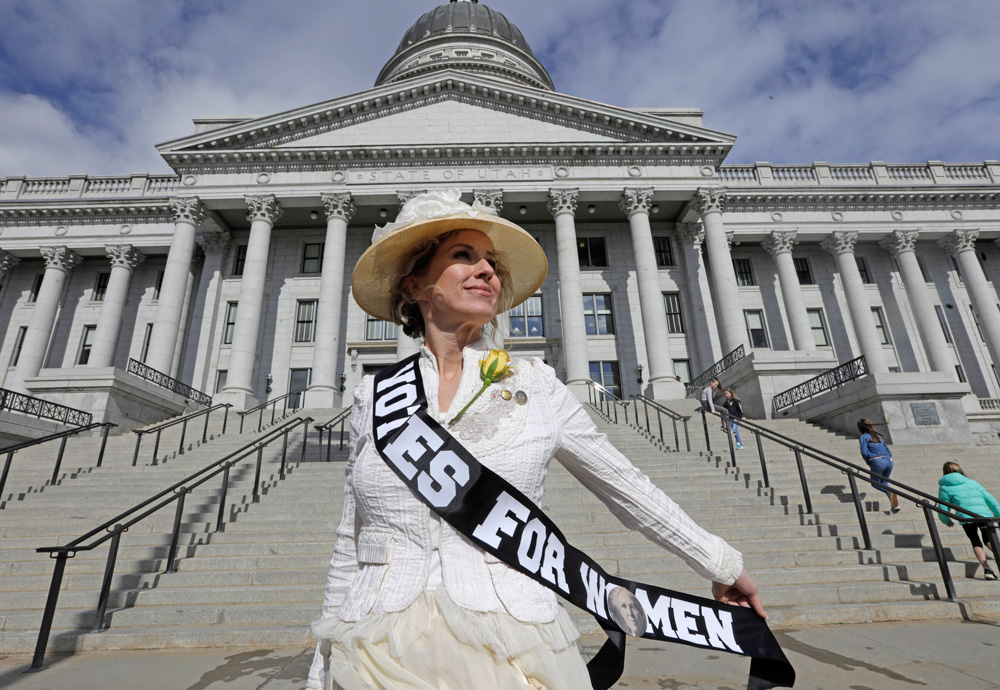 Today marks the 150th anniversary of women’s first votes in the United States under an unrestricted women’s suffrage law. On Feb. 14, 1870, 23-year-old schoolteacher Seraph Young cast her ballot in Salt Lake City’s municipal election on her way to work. She and about 24 other women voted that day, and that summer, thousands of Utah women followed suit in the general election. A full 50 years before the 19th Amendment became national law, female citizens in Utah made history as the first to exercise equal suffrage rights.

In February 1870, Utah’s territorial legislature passed a bill extending suffrage rights to female citizens. The territory of Wyoming enacted women’s suffrage in December 1869, but because of the timing of elections, women in Utah were the first to go to the polls. Some American women had previously been able to vote in limited circumstances — property-holding (single) women had voted in New Jersey until they and black men were disenfranchised in 1807. In the time after that, a few states such as Kentucky and Kansas had allowed certain women to vote in school board or other local elections. But the Wyoming and Utah territories were first to extend voting rights to female citizens for all elections without property restrictions. (Still, discriminatory citizenship laws excluded Native Americans and other women of color.) Significantly, while Utahns made history as the first voting women with equal suffrage, they were later disenfranchised as part of the federal government’s efforts to end the practice of polygamy.

This story reveals a historical truth overlooked in many centennial celebrations of the 19th Amendment — that the suffrage movement was a long slog with setbacks, divisions and mistakes along the way. Suffrage history has not been a linear progression. Women’s voting rights did not expand evenly to women of color. Nor did they expand permanently: History and current events show that voting rights are difficult to protect and maintain.

From the beginning in 1870, Utah women’s voting rights were entangled in the national controversy over the practice of polygamy among members of the Church of Jesus Christ of Latter-day Saints. The church believed that polygamy — plural marriage — was based on divine revelation and argued that polygamy was a superior social and religious system. But opponents argued that polygamy was oppressive and degrading to women and that it threatened the principle of individual liberty at the heart of the American republic.

After the Civil War, Congress turned its attention toward the “Mormon Question.” The 1856 Republican platform had called for the eradication of polygamy and slavery, the “twin relics of barbarism,” in the territories. Previous federal anti-polygamy legislation had not been enforced, and the completion of the Transcontinental Railroad and increasing attention to the West made it time to finish the job.

Some suffragists saw an opening and suggested that enfranchising Utah women might be the best way to end polygamy. If women had the vote, perhaps they could free themselves from the practice. In fact, Susan B. Anthony’s National Woman Suffrage Association (NWSA) urged Congress to enact a women’s suffrage law for Utah “as the one safe, sure and swift means to abolish the polygamy of that Territory.” It was also a way to experiment with women’s voting rights in a far-off western territory.

The bills stalled in Congress, but Utahns themselves took up the conversation about women’s voting rights, with a twist. The church-owned Deseret News editorialized: “If the wish is to try the experiment of giving females the right to vote in the Republic, we know of no place where the experiment can be so safely tried as in this Territory. Our ladies can prove to the world that … women can be enfranchised without running wild or becoming unsexed."

Utah women would provide an example to the world on yet another front if they gained the vote. With some strategic agitation from leading Latter-day Saints women to position themselves as trusted political partners, and an anti-polygamy law working its way through Congress, Utah’s territorial legislature unanimously passed a law in February 1870 extending voting rights to female citizens

At that time, the territory of Wyoming was the only place with a similar women’s suffrage law on the books, but Wyoming’s female population was one-tenth the size of Utah’s. So into the next decade, Utah women were the only substantial population of female voters. Their ballots immediately attracted national attention and scrutiny. When Anthony and Elizabeth Cady Stanton visited in 1871, they urged Utah women to “use the ballot for their own good” and “rid themselves” of polygamy.

National reformers watched hopefully, but it soon became clear that women were not voting against church leaders. So anti-polygamists came to see Utah women’s suffrage as a factor upholding polygamy. They argued that these women should be removed from the electorate, so they lobbied Congress to repeal Utah women’s voting rights and brought lawsuits attempting to invalidate Utah’s suffrage law

Latter-day Saints women in Utah fought to stave off their disenfranchisement for more than a decade. They mobilized to speak on a national stage and began one of the longest-running women’s newspapers, the Woman’s Exponent, in 1872. In its first issue, the Exponent declared, “It is better to represent ourselves than to be misrepresented by others!” Latter-day Saints women used the network of the Relief Society, the church’s women’s organization, to stage protest meetings, petition federal officials and lobby lawmakers in Washington. This political engagement was doubly transgressive, supporting two practices — polygamy and female suffrage — very much at odds with 19th-century American culture. It made a splash.

Foreshadowing the debate over suffrage that would play out in the early 20th century, Latter-day Saints women in Utah defended their political rights by defending their experience as voters. They countered claims that they were voting only as their husbands directed, that voting compromised their ability to fulfill their domestic duties and that they were too stupid, emotional or brainwashed to vote properly. Instead, they argued, as in this 1878 petition to Congress, “We have exercised the ballot with our own free will and choice, having fully demonstrated that honorable women command as much respect at the polls, as in the drawing-room, the parlor, and the Church.”

But their presence caused tension in the suffrage movement. Suffrage leaders didn’t initially know what to do with polygamous voting women, and the more mainstream American Woman Suffrage Association refused to work with them or defend their voting rights. So Latter-day Saints suffragists forged a mutually beneficial relationship with the more radical NWSA. They gathered more petition signatures than from any other state or territory in support of a constitutional amendment for women’s suffrage and secured an invitation to the NWSA convention in 1879.

Latter-day Saints women became fixtures of these conventions, seated prominently, given the platform to speak and highlighted as legitimate political actors. The NWSA never endorsed polygamy, but it raised a welcome voice against congressional attempts to disfranchise polygamous women.

But by 1887, the campaign against polygamy had won out. The Edmunds-Tucker Act passed by Congress disincorporated the church, changed marriage and inheritance laws and revoked all Utah women’s voting rights.

Latter-day Saints suffragists organized in 1889 under the NWSA to win suffrage back. Polygamy never fully disappeared as an issue in the suffrage movement, but it became less of a dividing wedge after the church announced the official end of the practice in 1890. The Woman Suffrage Association of Utah soon had thousands of members across the territory who lectured on equal rights, equal pay and other political issues, wrote columns in local newspapers, threw events and worked to get an equal-suffrage clause included in Utah’s constitution when it became a state. In all of this, they enjoyed widespread support from their local community and church leaders.

In these and other ways, Utah women broke ground for the broader women’s suffrage movement in the United States. When Utah joined the Union in 1896 and reinstated women’s voting rights, there were just two other suffrage states — Wyoming and Colorado. (Idaho passed a constitutional amendment later that year.) It would take 14 years for the next state to join them. Although national suffrage organizations were led from New York and Washington, western women gathered petitions, raised funds, went on the speaking circuit and showed that the sky didn’t fall when women voted. They pressured their elected congressmen, who greeted suffrage parades on the steps of the U.S. Capitol, spoke at rallies and continued to advance the “Susan B. Anthony” Amendment slowly forward.

Western women gained decades of experience as voters and elected public officials before most (white) American women first went to the polls in 1920. Voting women often testified before congressional committees about the “practical working of woman suffrage.” They showed that, contrary to anti-suffragists’ arguments, voting hadn’t degraded them, made them mannish or caused them to neglect home and family. Instead, as the nation’s first female state senator, Martha Hughes Cannon, testified in 1898, the experience of women in Utah showed that “none of the unpleasant results which were predicted have occurred.”

As we revisit suffrage history this year, let’s remember the women in the west who voted first and paved the way.